By Bernard - translated by Ivan

Translated on 21th february 2014 by Ivan

The dress worn for this activity was practical and comfortable. It includes a short tunic, a pair of hose, and a coat. In addition, Bernhardt wears a pair of spurs (as required by any horseman), a pair of gloves and a belt, and carries a horn (useful for communicating with other members of the hunting party and for pursuing the quarry). 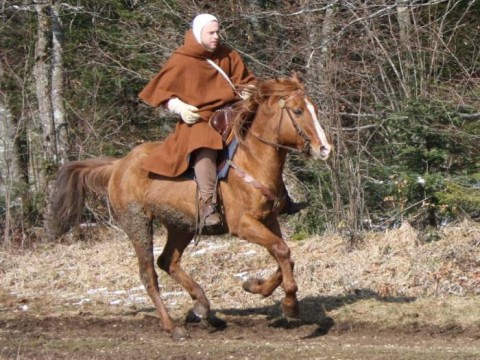 The hunting tunic is shorter than the one usually worn by noblemen at the time [1]. This was possibly due to the difficulty that a long garments would have caused when walking through the undergrowth.﻿

It is made of wool and its deep colour shows that our knight can afford good quality dyed cloth, but it is not emboidered or decorated in any way, since its function is not ostentatious or ceremonial.﻿

The pattern is based on the so-called “Kragelun tunic” [2]. Even though this garment is dates from an earlier period (between 1040 and 1155) and has a different geographic provenance, its pattern is similar to the ones seen on different pictorial sources from Bernhardt's period, including fitted cuffs and a baggy cut for the rest of the garment. Unlike the original item, Bernhardt's tunic has a front and rear vent, which makes it more practical for horse-riding. ﻿ 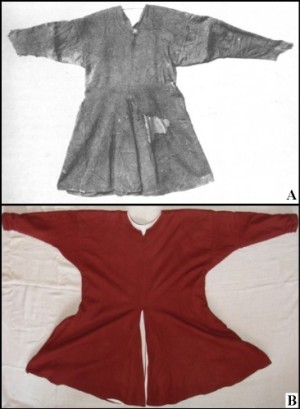 The pair of hose are made of brown wool, typical of the period. Like the tunic, they are simple, practical but good-quality garments.﻿ 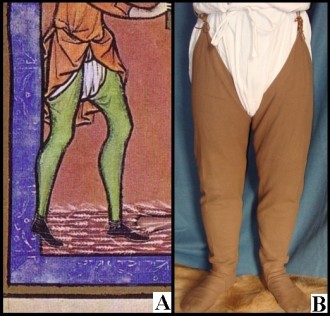 Based on a sculpture found in the Abbey of Saint Denis, with a pattern similar to the ones seen in the Maciejowski Bible, Bernhardt's coat protects him well from the cold and has a practical, comfortable cut for horse-riding (even though it is slightly too long for walking through the undergrowth). The good quality of the wool and the dye, just like the tunic, would have been afforded by a knight.   ﻿ 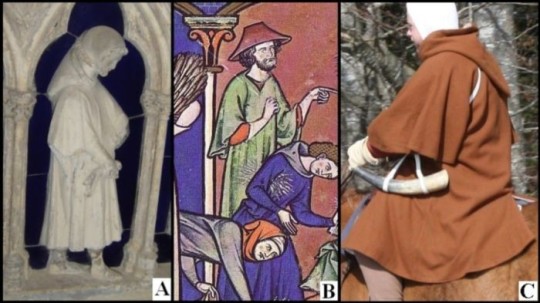 ﻿Hunters are shown with hunting horns on many seals, miniatures and sculpturesn les sceaux, les enluminures et les sculptures. Bernhardt de Teyssonnière carries such a horn. It is made of animal horn and is fitted with a leather sling. This allows him to carry it and have it to hand when riding. 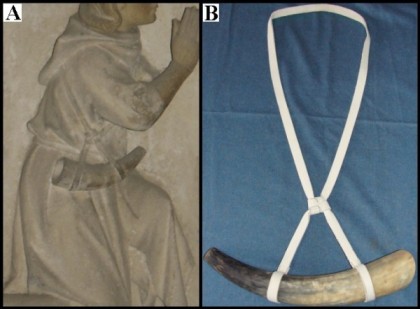 A – Framed altarpiece of Saint Eustace, showing the “vision of the stag”, 13th century, Abbey of Saint Denis. B – Bernhardt's horn. 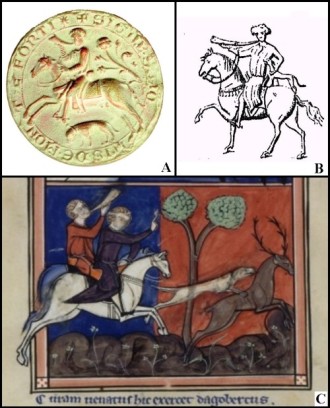 The belt is a simple leather strap with a brass buckle similar to the ones found in the Sens region in France.﻿

A – A number of buckles with protruding “ears” found in the Sens region (photo by Buthod – Ruffier, shown in “Boucles et fermaux du Moyen-Âge”, Moyen-Âge n°48). B – Belt buckle on Bernhardt de Teyssonnière belt made by Denis Sempé.

The gloves are made of fine leather. Their function is practical, since they protect the hands from the cold and from friction when holding the reins, but they may also have had a symbolic function. Several subjects shown wearing gloves in pictorial sources seem to be of a higher social status. In any case, both functions would be compatible with Bernhardt's status.﻿ 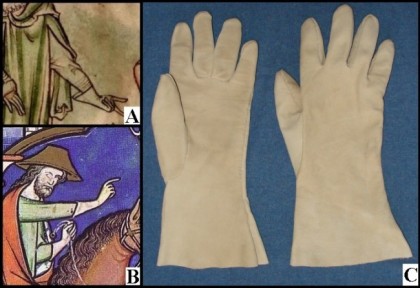 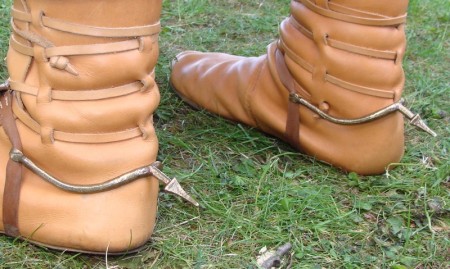 Riding in the undergrowth

On the seal of Geoffroy de Lusignan (see figure 5A), the horseman rides with reins looped around the hand holding the horn [3] and with the other hand holding the dog astride the horse's croup (the dog, even running, would not be able to keep up with the horse). Even without a dog, this position allows the rider to keep one hand free to protect himself from low-hanging branches while sounding his horn. In open terrain, the rider can adopt the usual riding position. 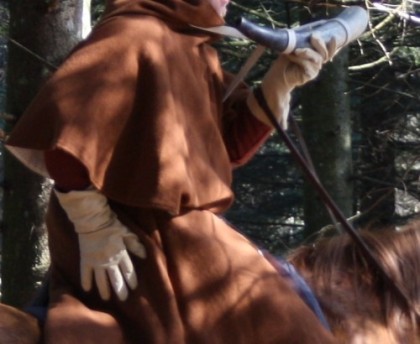 The hand holding the horn passes through the loop of the reins. 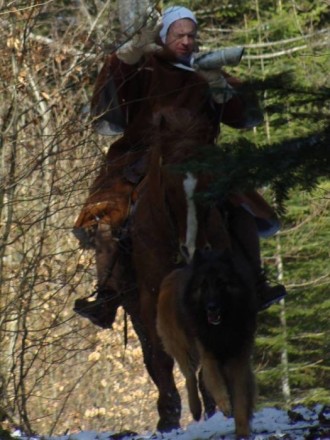 It is always better to keep one hand free when riding through the undergrowth. Note: The dog shown here is a Belgian Shepherd, which was possibly first bred in the 13th century[4] according to Pierre Van der Heyden.

We would like to thank Gaëlle and Thomas for hosting us and allowing us to ride Matthéo and to use Charly (the dog) for these photos.﻿ 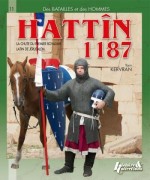 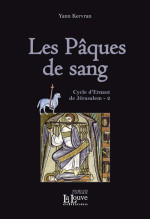 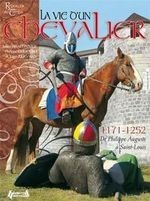